Discover the results from the final day of the Antalya Grand Prix 2018.

-78kg: Kosovo have a new star on their hands asKUKA wins on Grand Prix debut

Kosovo have unearthed another gem on the IJF World Judo Tour as 21-year-old uchi-mata specialist Loriana KUKA (KOS) wasted no time in making her presence felt at the top level with a eye-catching victory at -78kg. Tbilisi Grand Prix silver medallist Anastasiya TURCHYN (UKR) opposed KUKA in the final and it was the Kosovo judoka who won their first clash with a buzzer-beating ouchi-gari. The top prize represented Kosovo’s first ever medal at this weight and made sure that the land Olympic champion Majlinda KELMENDI made famous finished the competition top of the medal table. 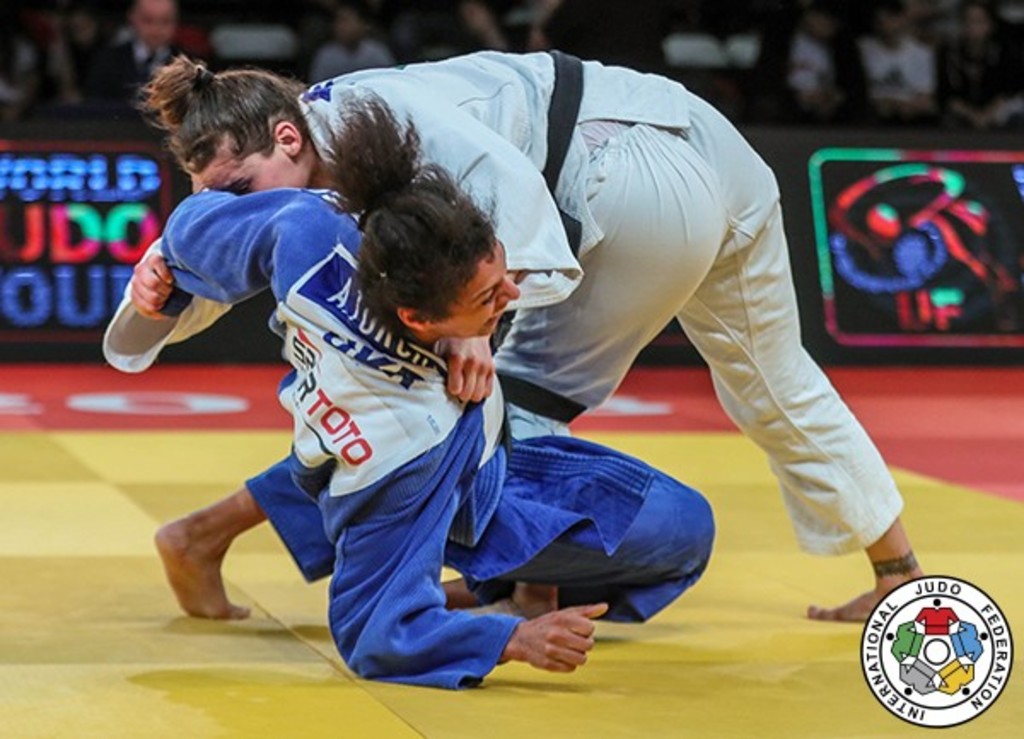 In the first semi-final KUKA threw world number 43 NIKIFOROVA (RUS) for ippon with an uchi-mata with 45 seconds left on the clock to guarantee one more medal for Kosovo. KUKA led with a waza-ari from a hip throw before ending the contest in fine fashion. In the second semi-final TURCHYN defeated u23 European Championships bronze medallist Alexandra GIMALETDINOVA (RUS) in added time. GIMALETDINOVA struck first with a waza-ari from a tani-otoshi before TURCHYN replied with an osoto-gari for a waza-ari score. In golden score the Ukrainian sealed a place in the final from a ouchi-gari which earned her second and match-winning waza-ari.

The first bronze medal contest was won by world bronze medallist Natalie POWELL (GBR) who defeated GIMALETDINOVA with a professional performance. World number three POWELL earned her 16th Grand Prix medal by a waza-ari score as GIMALETDINOVA offered little under an onslaught from the Welsh judoka. Only two judoka have won more Grand Prix medals than POWELL (Luise MALZAHN of Germany and Otgontsetseg GALBADRAKH of Kazakhstan) and the Irfon Judo Club product will be one of the favourites at the European Championships later this month.

The second bronze medal was won by NIKIFOROVA who went ahead against Agadir Grand Prix bronze medallist Yarden MAYERSOHN (ISR) with a waza-ari score from an osoto-makikomi. Russian NIKIFOROVA added her second and match-winning waza-ari with a sode-tsurikomi-goshi to capture her first IJF World Judo Tour hardware. 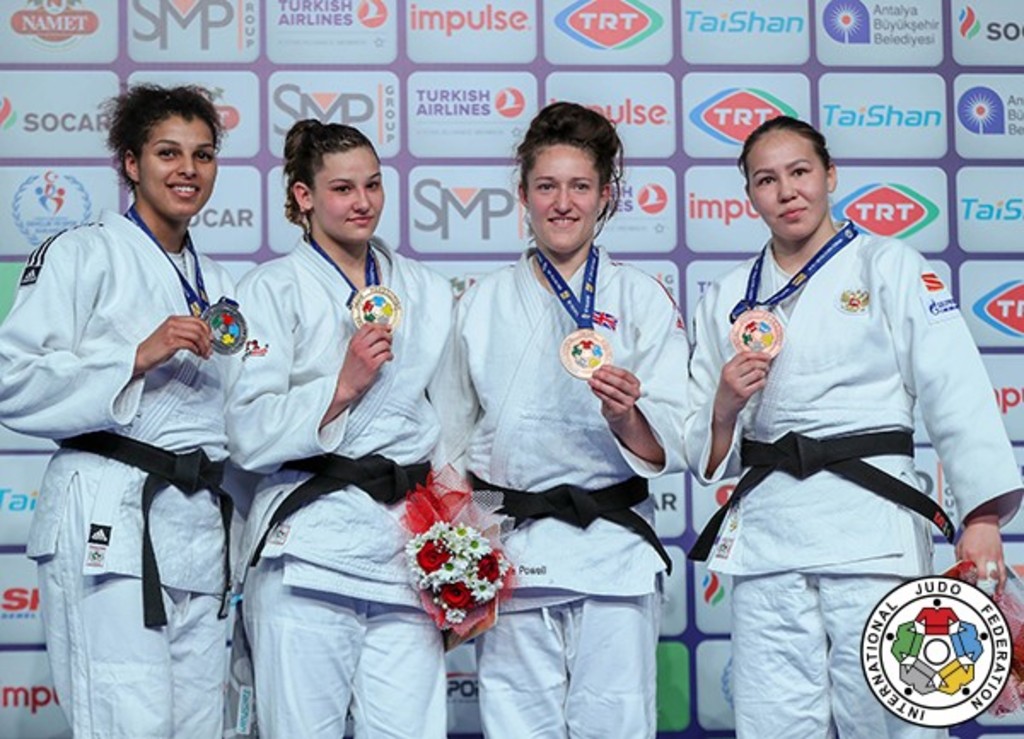 European u23 Championships bronze medallist Sebile AKBULUT (TUR) gave the hosts their second gold medal in as many days as she conquered Ekaterinburg Grand Slam winner Larisa CERIC (BIH). Turkey finished third in the medal table with an excellent haul of four medals (two gold, two bronze) as world number 138 AKBULUT, who finished fifth here a year ago, found a way past CERIC. AKBULUT beat CERIC for the first time with an ouchi-gari which scored a waza-ari and the home judoka held on for her first medal in IJF surroundings. 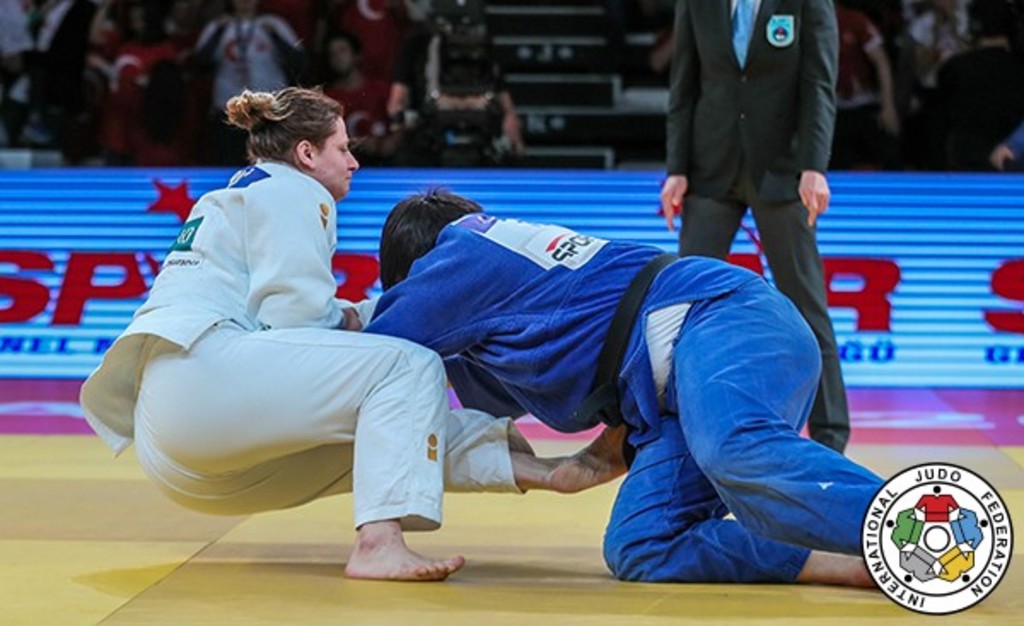 The first bronze medal was awarded to TARASOVA who beat former Junior European Championships bronze medallist Iuliia LIANICHENKO (RUS) by ippon at the halfway point. LIANICHENKO had to settle for fifth-place on her first senior IJF start as Ukraine’s number three at +78kg TARASOVA won her second Grand Prix medal.

The second bronze medal was won by GUSHCHINA who outworked 18-year-old Junior Asian Championships winner Kamila BERLIKASH (KAZ). Russia won their second tilt at +78kg bronze thanks to GUSHCHINA who produced a waza-ari score with a ko-uchi-gari as the Kazakh finished a respectable fifth on her inaugural appearance on the IJF circuit. 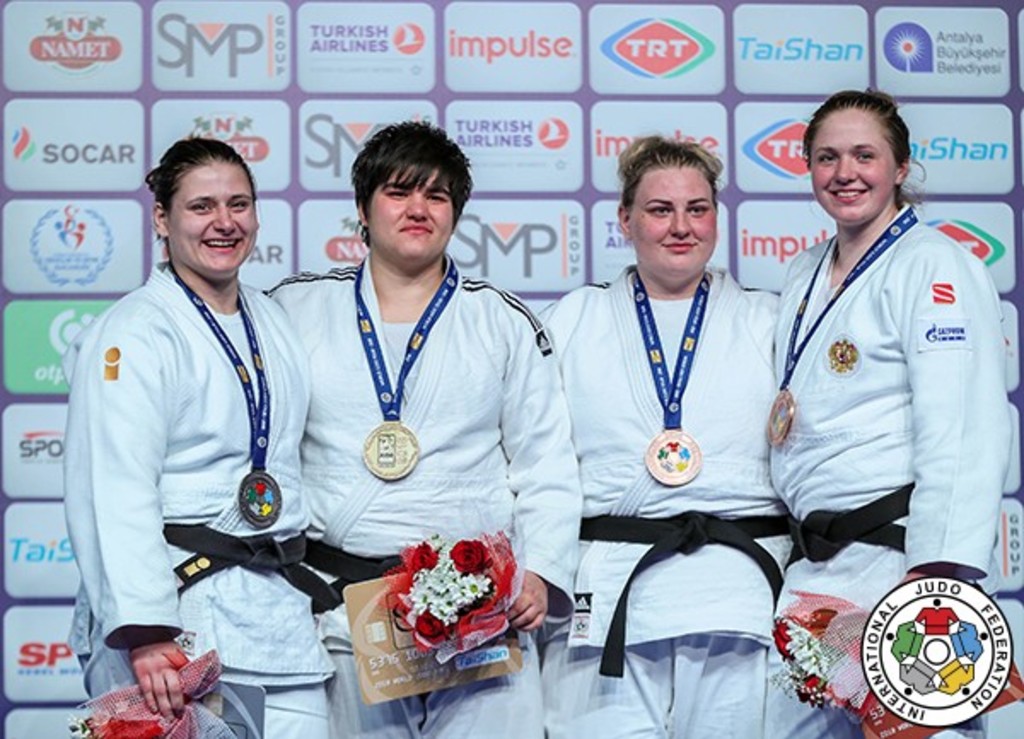 Number one seed Komronshokh USTOPIRIYON (TJK) won his third Grand Prix gold medal after a tense battle with world champion Nemanja MAJDOV (SRB). MAJDOV had finished fifth on his return in March at the Agadir Grand Prix. The 21-year-old Serbian judoka wore his red backpatch for only the second time and failed to win what would have been his first Grand Prix title after being penalised for his third shido for pushing his opponent out of the area. USTOPIRIYON usually makes a strong start but tends to fade late on and as both were nervy it was the Serbian who made the costly mistake. 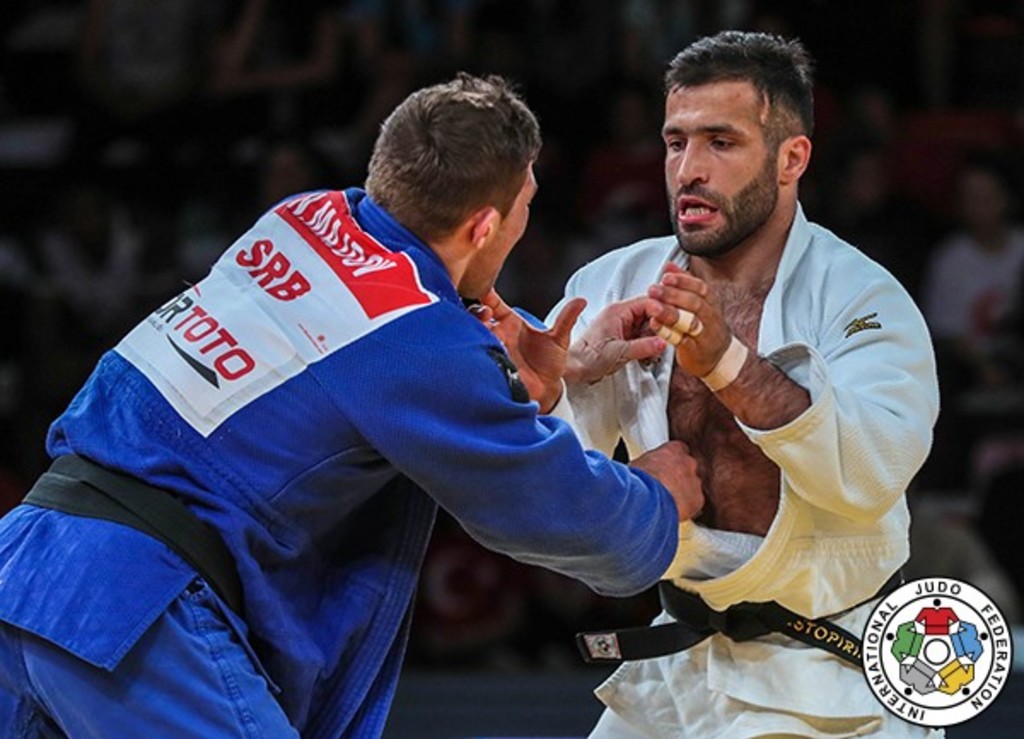 In the first semi-final USTOPIRIYON defeated Abu Dhabi Grand Slam bronze medallist Mammadali MEHDIYEV (AZE) who was disqualified after he was penalised with his third shido. In the second semi-final MAJDOV bested Cancun Grand Prix silver medallist Tural SAFGULIYEV (AZE) by ippon from a uchi-mata-sukashi with 71 seconds left in their contest.

The first bronze medal was won by SAFGULIYEV who earned his fourth Grand Prix medal by edging out 22-year-old Tbilisi Grand Prix bronze medallist Li KOCHMAN (ISR) by a waza-ari score as Azerbaijan claimed the first medal in the final block. A ko-uchi-gari was the best executed technique during the contest and that piece of ashi-waza sent the Azeri onto the medal podium.

The second bronze medal went to MEHDIYEV as Azerbaijan made it a clean sweep of -90kg bronze medals. MEHDIYEV won his fifth Grand Prix honour by catching Tbilisi Grand Prix winner Rafael MACEDO (BRA) with an ouchi-gari and changed direction to set his opponent off balance and over for ippon. 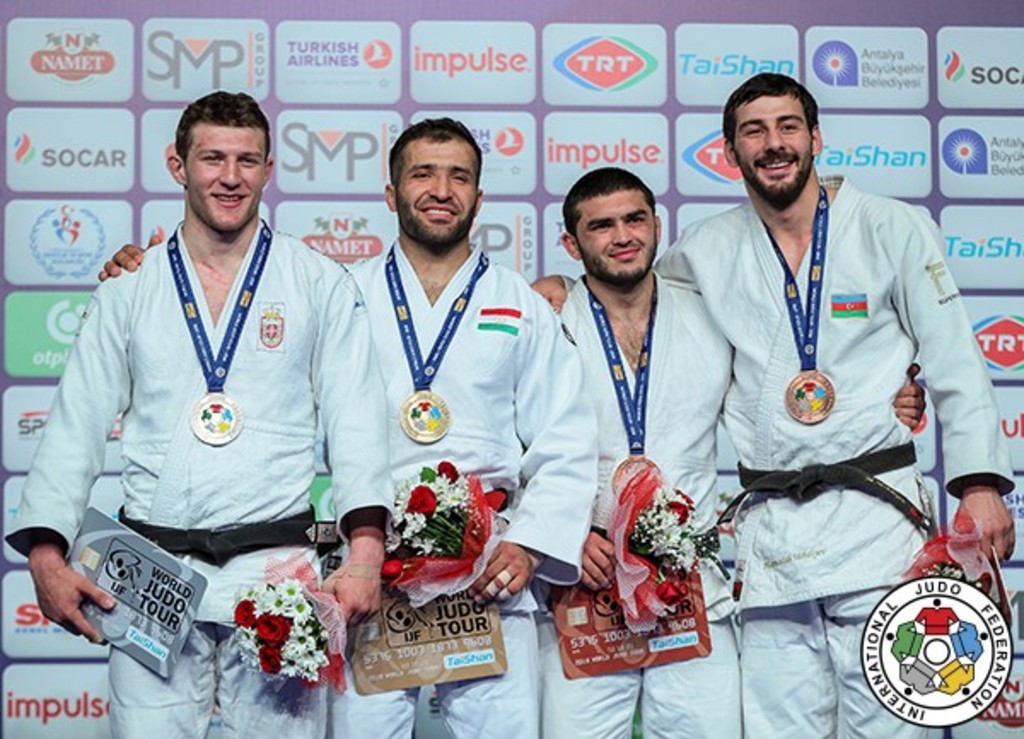 Junior World Championships winner Zelym KOTSOIEV (AZE) won a rematch of 2017 Junior Worlds final to become a two-time Grand Prix winner. The confident 19-year-old saw off Junior Worlds runner-up Arman ADAMIAN (RUS), 21, who was making his first start on the IJF World Judo Tour, while KOTSOIEV, 19, won the Ulaanbaatar Grand Prix in 2016. KOTSOIEV scored two waza-ari in a relatively one-sided final as the Azeri showed his superiority over his former junior rival and their intriguing series of contests may long continue on the senior stage. 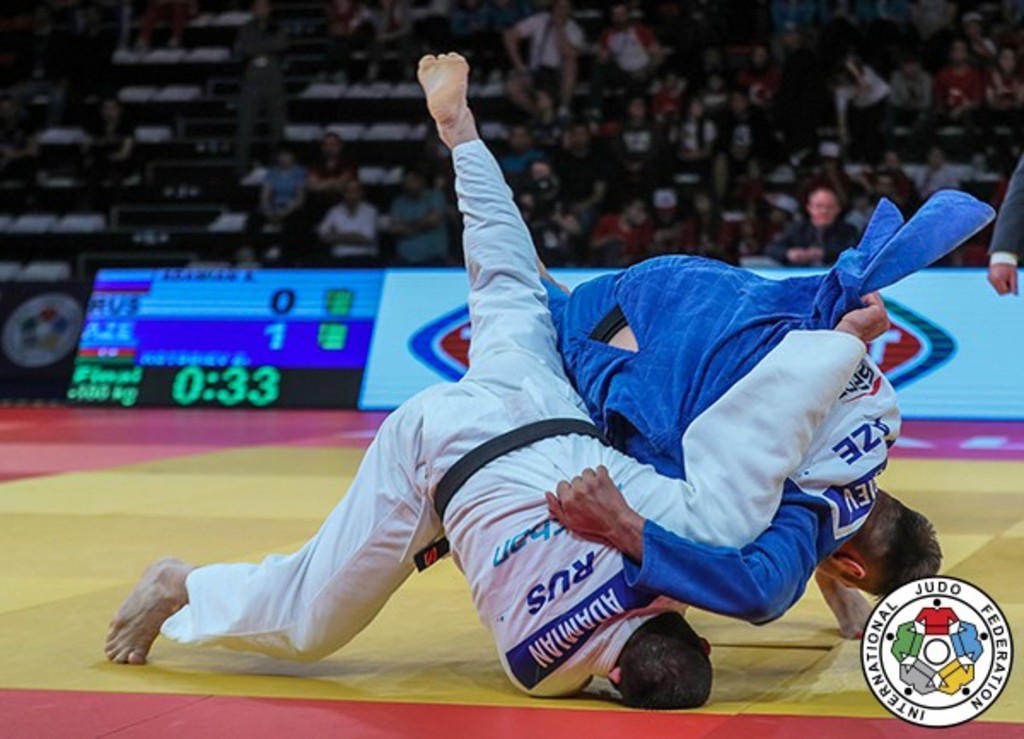 In the first semi-final World Judo Masters bronze medallist CIRJENICS Miklos (HUN) lost out to ADAMIAN by ippon. The Hungarian went for a ko-soto-gake and the Russian took control to drive his opponent over for ippon. In the second semi-final KOTSOIEV moved forward when Ekaterinburg Grand Slam winner Niyaz ILYASOV (RUS) had to forfeit the contest when he sustained a leg injury.

The first bronze medal was won by two-time Grand Prix winner LKHAGVASUREN Otgonbaatar (MGL) as ILYASOV could not come out to contest the final due to an injury. The result was a much-needed boost for the Mongolian who had been without a medal since moving up to -100kg last year.

The second bronze medal went to world number 10 Benjamin FLETCHER (IRL) who caught CIRJENICS with a ko-uchi-gari with one second left. Düsseldorf Grand Slam silver medallist FLETCHER kept working until the end and got his reward as he won by ippon and will be seeded for the European Championships. A tani-otoshi from the Hungarian was countered by Ireland’s FLETCHER to win his second Grand Prix medal in 2018. 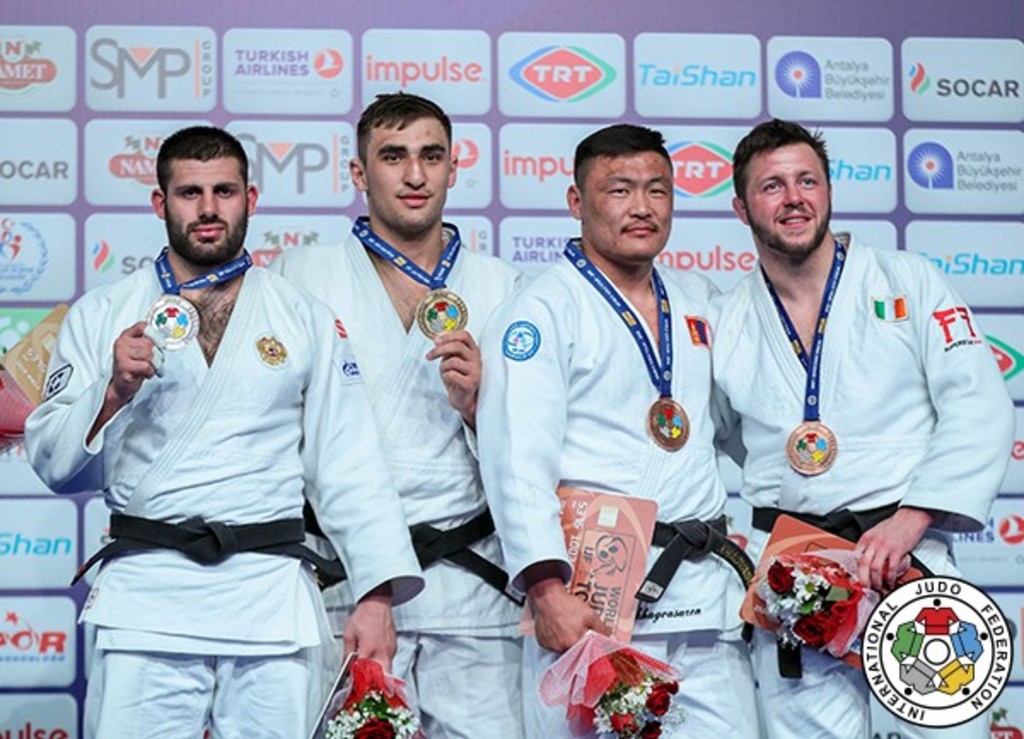 Junior World Championships winner Inal TASOEV (RUS) went unbeaten on his first IJF World Judo Tour outing as he won all five of his contests by ippon for a stirring win in Antalya. TASOEV, 20, is arguably the most promising Russian heavyweight in years and on this performance could make his presence felt at the European Championships later this month. In the last contest of the Antalya Grand Prix 2018, TASOEV, 20, defeated Tbilisi Grand Prix silver medallist Javad MAHJOUB (IRI) in golden score after two minutes of added time with an o-goshi. MAHJOUB missed the birth of his first child earlier in the week in order to compete this weekend. 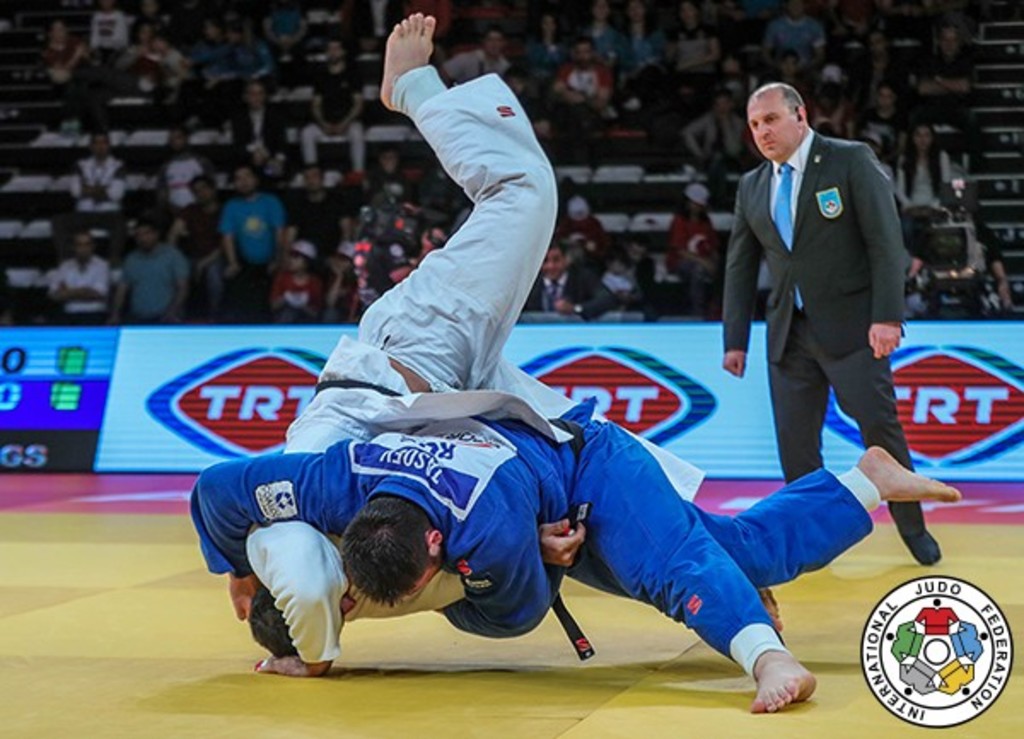 In the first semi-final world number 100 Jonas INOCENCIO (BRA) lost out to MAHJOUB by ippon from a seoi-nage. In the second semi-final TASOEV defeated Düsseldorf Grand Slam bronze medallist Bekbolot TOKTOGONOV (KGZ) with a modified kata-guruma for ippon.

The first bronze medal was won by world number 26 Andy GRANDA (CUB) who beat TOKTOGONOV by ippon from a thumping ouchi-gari. Cancun Grand Prix bronze medallist GRANDA, 26, had too much experience for TOKTOGONOV, 26, who first featured on the IJF World Judo Tour in February.

The second bronze medal went to Paris Grand Slam silver medallist KIM Sungmin (KOR) who launched INOCENCIO with an osoto-makikomi for ippon. KIM was a relieved winner as he won his country’s third medal in Antalya from a five-strong team. 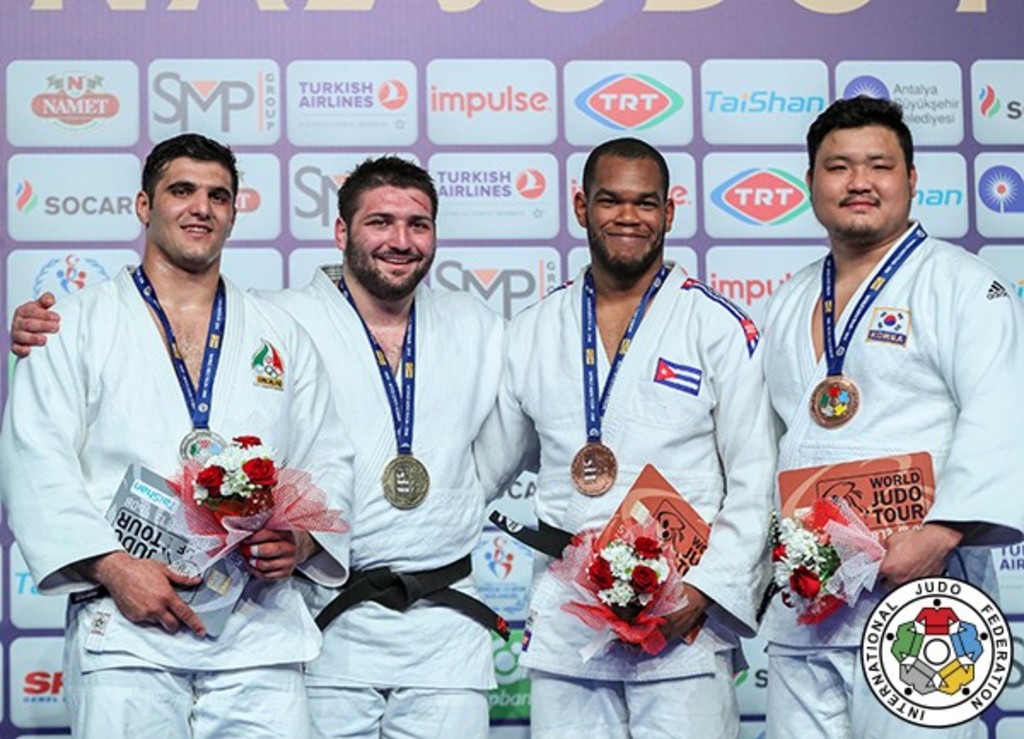